Thanks to everyone who came out to L.A. for the Marketplaces 2009 conference this week — and to everyone who followed us on the blogs and Twitter. We had a great time. Here are some top-line takeaways.

1.    The vertical online environment is still immature and will actually grow very healthily over the next several years. It is amazing to see the growth that sites like AutoTrader and Cars.com are delivering in this environment.

2.    SEO is a big part of any vertical’s success — AOL YP gets 50 percent of its usage from SEO. G5 Search marketing, which specializes in self storage; Teachstreet; and Allmenus.com will all leverage it. But SEO can’t be the only tool in the arsenal. Krillion had to make direct affiliate deals to get going.

3.    One of the biggest challenges is getting more local vertical information online. Google Local head Chris LaSala estimated that less than 10 percent is online. But things are looking up: AutoTrader head Chip Perry noted that used car listings have gone from 3 percent to 50 percent. We need a similar migration in other categories.

4.    Syndication is huge. It is the new driver for Citysearch via Facebook Connect, and for Oodle across a wide range of services. The open API model, perfected with Google Maps distribution to thousands of sites, is the new standard.

5.    Mobile advertising can bring some revenues, but that’s not why mobile is important. As Cars.com’s Bill Swislow and NearbyNow’s Scott Dunlap noted, the real power of mobile is providing 24/7 information on the go, when you’re shopping. Verticals must mobile-ize now.

6.     If you are a platform provider, you won’t be successful solely on the backs of newspapers and YP. They can still be very helpful, but they’re not the main deal.

7.    The days of multimillion-dollar “slotting” deals are gone — especially for established brands. At the same time, new verticals still need portal exposure. Can they deal/partner?

8.    Anyone can set up a “TV station” using the Web, and video still beats text and images, every time. Newspapers have made some tentative efforts, but new video providers like Greenspun’s 702.tv in Las Vegas might prove to be the ticket. It’s fast-paced underground local videos beat the pants off a 30-minute news broadcast.

9.     The mixture of video and search is a real killer app. Demand Media’s bid to be the YouTube of instructional video could really be a powerhouse. 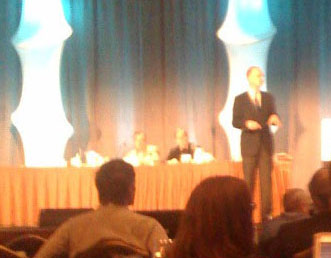