Marketplaces is under way with the opening keynote from Jeff Berman, MySpace president of sales and marketing. MySpace has made some inroads to attracting SMBs to use the social network as a marketing platform.

Most recently, this has included its MyAds program. which lets businesses establish a profile in the same way that individuals and bands traditionally have done on MySpace. The value proposition is essentially an online presence for on reputation management and advertising within the MySpace network in what Berman calls a “hyper-targeted” way. (Facebook has made similar moves.)

“We have 20 times more data than the Library of Congress. We’re crunching data daily, putting people into enthusiast segments,” he said. “So a company like Proctor & Gamble can target men below the age of 30 who love the NFL and have shopped at Wal-Mart in the last 30 days.”

A product called Bacon Salt, for example, utlized MySpace adds to get a virally driven 200 percent traffic boost. A Chicago roofer spent $100 on MyAds and got a $30,000 roofing job in eight days. This utilizes the same word-of-mouth marketing that has been the most universally and timelessly successful form of local marketing, Berman argued.

For MySpace this has traditionally happened with music and other things that are conducive to the self expression at the heart of its consumer experience.

“What this enables is a virtuous viral cycle,” said Berman. “Someone discovers content, self expresses and then communicates that to their friends.”

In a local context, this applies to things like classifieds (albeit, not as sexy as music and video content). Like Facebook, MySpace pulls in content from classified aggregator Oodle (CEO Craig Donato is speaking here on Friday). In the MySpace environment, this plays out when classified items are posted, viewed or interacted with in any way; interaction updates are fed into a user’s activity feed that’s seen by his or her friends.

The bottom line for Berman is that MySpace is both a communication tool and a content platform. The former is clear given its user base, which has lost considerable share to Facebook but still maintains strong engagement metrics key to social networking (session lengths, page views, etc.). For the latter, it’s the second-largest video site on the planet, the largest photo site, and the largest online repository of licensed video and music.

“It’s a new world in which some of the most powerful forces are essentially children. Just look at the engagement metrics of MySpace, Facebook and YouTube,” said Berman. “We’re seeing an average five hours per month on [MySpace]. In terms of overall users, we’re a little smaller than Russia and a little bigger than Japan. We’re the ninth-largest nation in the world.”

This is true, but proven ability to balance out the ratio of consumption/monetization has been the biggest criticism of all these sites. MySpace has been the most effective with respect to monetization (also the most spammy of the three), while YouTube and Facebook show signs of moving in that direction. A tough balancing act, given a fickle user base that’s erstwhile been fed a free lunch. 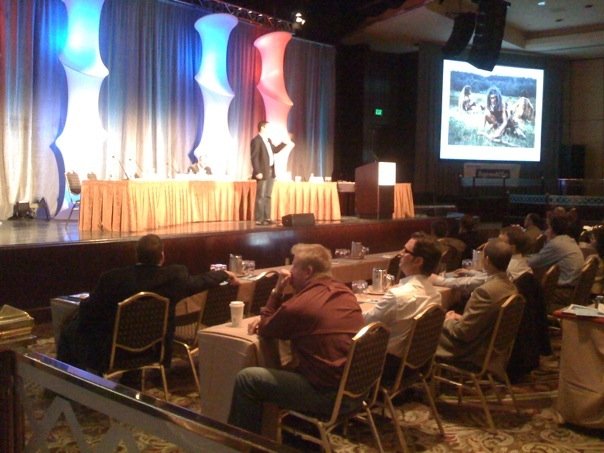