R.H. Donnelley has recently opened up the beta version of its new DexKnows IYP platform (the new search box is above right), known internally as DK2, which TKG previewed last week with Brian Barnum, president of RHDi, and Jeff Porter, VP & GM and the one charged with product development for DexKnows.com. This project has been under way for well over a year, and RHD is relying on the new platform, as well as a new SEM platform called Dex Net, to propel RHD from its current second-tier digital position among directory publishers.

Barnum, who came to RHD through the Business.com acquisition, stressed that the platform is a transformational change, not an incremental one. “Everything but the listings is brand new,” he told us. Much of the development muscle behind the new IYP came out of the Business.com team in Santa Monica, including former Rent.com VP of Product Management Mark Eastwood, who was in charge of crafting the new user interface.

While the beta still has a few quirks, it is clear the new DexKnows is much more robust than the previous version, though a user will need to invest a little time in the site to fully appreciate the difference. The Kelsey Report will provide a more detailed review in an Advisory after the first of the year, but for now here are a few images and highlights of the new site.

One key difference with the beta of DK2 is that it makes a distinction between service area-based businesses like plumbers and fixed location-based businesses like restaurants. So if a user searches for a plumber serving the 60048 ZIP code, the result will show the business’ defined service area rather than its physical address. If executed well, it could represent a significant edge over the aggressive map-based approach many take to local search, where plumbers are plotted on maps based on their physical location, which is irrelevant.

In the early stages, Dex is using the existing print directory coverage area as a default “service area,” but advertisers will have the ability to draw their own service boundaries to overrride the default setting. Dex explained that the print boundaries were the best available default, but the hope is over time to have more precise advertiser defined boundaries.

These images show the new Dex (top) displaying a result for a plumber in the Chicago suburbs with a designated service area (though it seems to cover most of Chicagoland), and the image below from the current site shows a map with the notation “not enough information to locate the business on the map.” The service areas still need refinement, but the idea of making a distinction between outbound and inbound businesses is an important step.

Another new feature we liked was the ability to search by landmarks. We typed in “restaurants, Wrigley Field” and got a nice result. When I typed in “restaurants near Wrigley Field,” however, the results were a little kludgey. Some refinement needed is here, but again it’s a nice feature. When I tried this on the current site, it produced a result, but with several listings many miles from the friendly confines. On Google, this query produced a somewhat better result, but at least the new Dex is offering a similar experience and it can further refine this feature.

We encourage you to try the beta and post your comments on your experience with it. 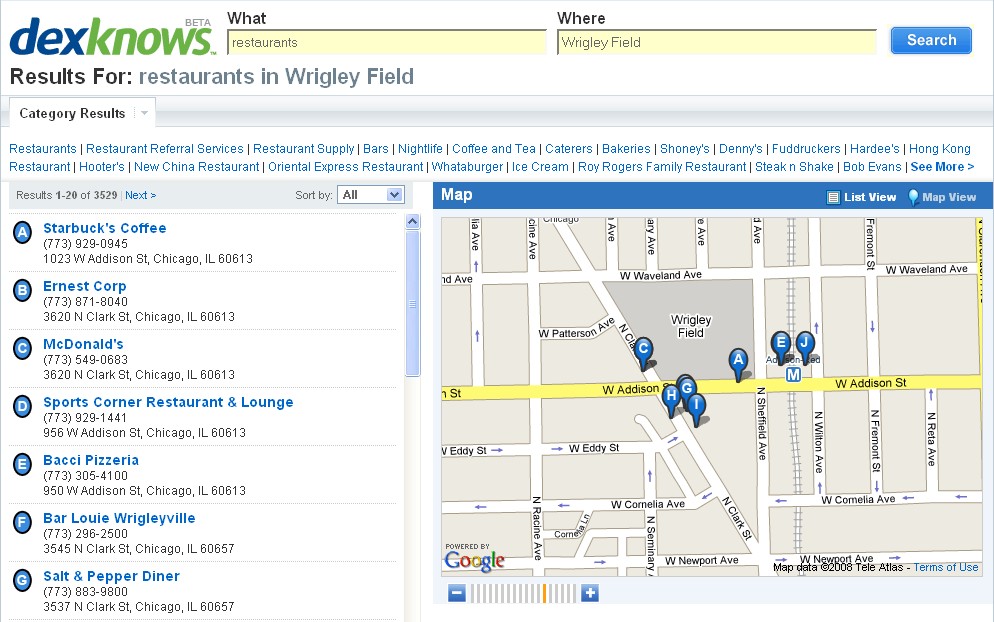