Sometimes even the most clever advertising for Yellow Pages has a “been there, done that” quality to it. Take a funny situation, add a clever conclusion involving a play on words related to a Yellow Pages heading and, bam, you’ve got a campaign. Some of these feel tired, and others not so much because of exceptional writing and execution. But the premise is always the same.

Yellowbook‘s ongoing campaign has elements of this tried-and-true formula (read our earlier post on the campaign). What sets it apart is the way it uses an interface that doesn’t even exist (a kind of “Minority Report” virtual reality thing) to demonstrate the utility of Yellow Pages rather than emphasizing a specific medium, like print or IYP or mobile. I think it’s pretty smart, though some might argue this approach risks confusing consumers. Yellowbook has also engaged viewers by creating a cliffhanger of sorts, giving everyone a chance to vote on the outcome of the mini-drama established in its most recent “Breakup” spot. 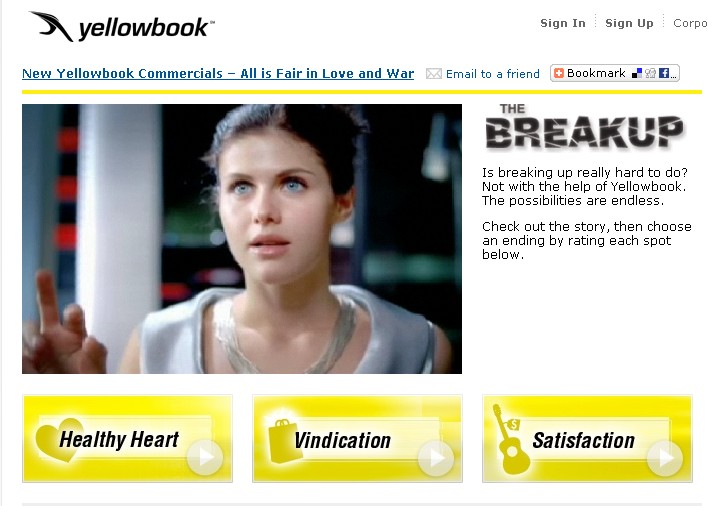 In New Zealand, a very original multimedia campaign is under way, called “Yellow Treehouse.” A young woman named Tracey is charged with building a restaurant in a treehouse in a New Zealand rainforest (I totally want to have dinner there one day). As she works her way through the challenge of building the restaurant, she turns to Yellow to find what she needs to get the job done. The whole thing is being blogged and YouTubed and whatevered throughout the entire process.

These campaigns are good examples of using new media and more modern marketing conventions — the New Zealander’s tapping the reality TV vein with the Treehouse restaurant stunt, for example — to promote an age-old product.