AT&T has announced that iPhones will be allowed free Wi-Fi access at its 17,000 nationwide hot spots. This includes Starbucks, airports, hotels and lots of other public spots.

This is especially good news for first generation iPhone users who don’t get 3G network access; the bump up to Wi-Fi speeds is a starker contrast for them. For everyone else, it’s still a nice bonus and is yet another enticement — beyond falling prices and elegant designs — to get an iPhone.

IPhones still make up less than 1 percent of the global cellphone market, but the needle could move as prices bring it within the range of a mass market device. Just think: The iPhone’s $200 price tag is equal to what Motorola’s RAZR — ancient by today’s standards — cost just two years ago (notwithstanding data plan).

Along these lines, free Wi-Fi is another enticement to add to the pile. Among other things, Wi-Fi connectivity can make up for lapses in coverage for a more seamless experience in some areas. And more Wi-Fi users mean less that leech off the 3G network, which is better for everyone. 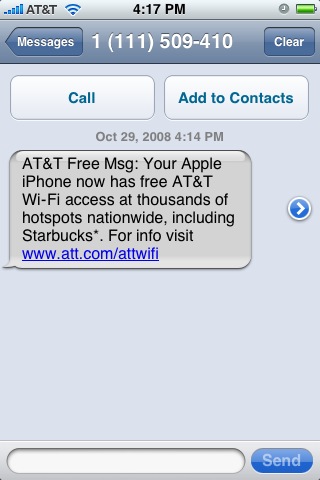