Like many of the other video search companies that employ a combination of video indexing technologies, EveryZing’s technology uses speech-to-text processing at its core. Its IP comes out of government research giant BBN Technologies, according to CEO Tom Wilde, who welcomes the Pepsi challenge against any other video search player out there.

This week’s MetaPlayer launch is a new productized version of this core technology. It admittedly has an attractive interface and feature set, which includes searching for words in a transcript and landing the searcher right at the part of the video where the word is uttered (others, like ScanScout, can do something similar). Here’s an example of the player in action.

Other features include speech-to-text processing that happens in near-real time, according to Wilde. This is an important feature for indexing breaking news content and video that will be searched for and viewed within the increasingly rapid-fire news cycle — an area where EveryZing will focus.

So far, it has partnered with tier-one media companies such as Boston.com, Fox Sports, the New England Patriots’ site and others. The player can also be used to index YouTube videos, which gives them better search functionality than YouTube itself offers. Wilde claims that in the future the company will utilize the appeal and flexibility of the player to move further down the tail into various verticals as well as local.

Beyond the user-centric nature of the MetaPlayer, its underlying technology could also be used for better video monetization. In other words, the same contextual hooks that its speech recognition uncovers to index video will also serve to assign meaning for better contextual ad matching. This not only deals with individual words, as is done with text ads, but also employs pattern matching technology to make sense of decidedly more complex video.

Indeed, the biggest challenge with video has been integrating ads in a way that isn’t obtrusive to the content. This applies to both ad formats and contextual relevance. EveryZing and other video search players are essentially working on the latter as a by-product of their core mission to make video more searchable. But it soon could be more than just a by-product.

“We’ll move in that direction in the future,” says Wilde. 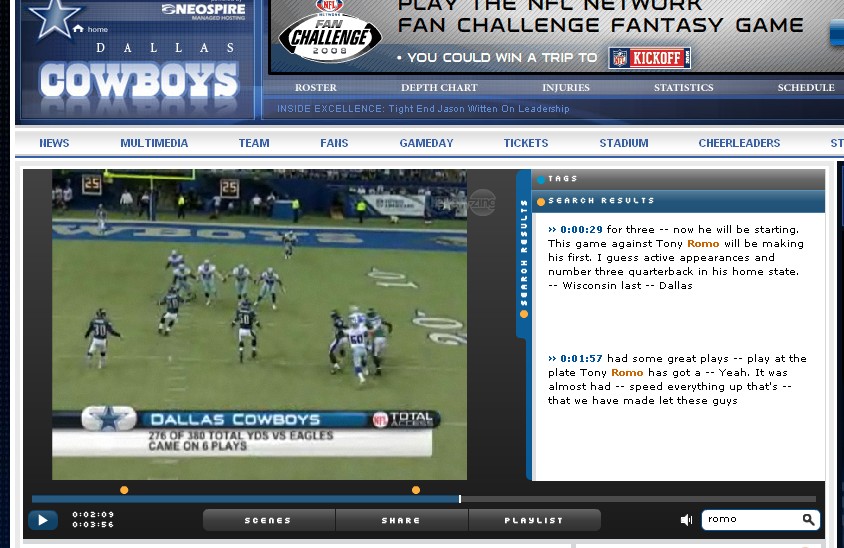