As we’ve speculated, one way mobile marketing could begin to take off is Google’s possible integration of an option in the AdWords work flow that allows marketers to specifically target searches done on iPhones. The first signs of this are beginning to be seen. According to Adweek:

In meetings with agencies, Google has presented a new option to show different ads in response to searches made from iPhones. The change, expected to be implemented shortly, means advertisers will be able to create an iPhone ad group as part of their regular search campaign, according to agency executives briefed about the modification.

Currently, some Google sponsored links can be seen on the iPhone because its Safari mobile browser shows a version of the Web similar to that viewed on a desktop (albeit smaller and without Flash). The prospective difference here is that ads can be created that are more conducive to the mobile use case. Calls to action, for example, can be modified to focus on calls rather than clicks (or links to local maps).

The challenge will be figuring out where to put these sponsored links (if that is indeed the form they will take). Currently Google searches on the iPhone return links that are mostly organic. Sponsored link real estate is limited and the “below the fold” inventory challenge is increased by a small screen (screen shot from my phone below).

That aside, it’s a logical move because iPhone users have shown heavy search volume and are also a very attractive, buying-empowered and fashion-forward segment. This should get the ball rolling for brand advertisers and agencies to adopt mobile into their marketing mix.

This could also be a precursor or a test bed for the mobile marketing that Google will invariably serve on Android-based devices — both search, display and other clever integrations that we haven’t seen yet. 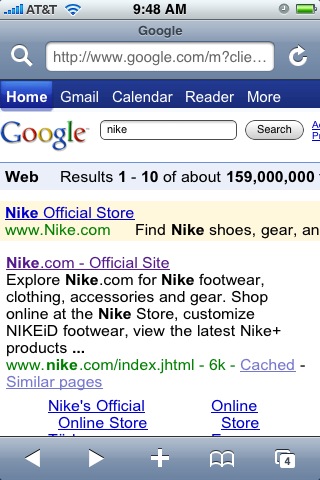 Aside: For iPhone users, I just discovered a nice feature that lets you take a screen shot of any page you’re on. Just click the home button and the power/sleep button at the same time. A jpeg of that screen shot will be placed in your camera roll.