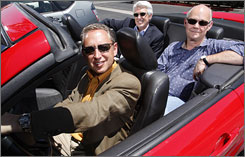 The news hit the wires this week that Autobytel, one of the original third party auto sites, had hired RBC Capital Markets to explore its options, and was laying off 75 of its 225 workers. This was on top of recent executive departures (Mark Canon to Yell.com; Jon Rosen to SpotRunner).

We asked CEO Jim Riesenbach, originally recruited from the leadership at AOL, what was really going on. Riesenbach says it is not as bad it may look. The company is actually sitting on a cash pile of $30 million, and it continues to have good revenues coming in from its primary business of selling 3 million leads a year to a network of 2,500 auto dealer rooftops – 25 percent of all dealers. The company earned $19 million in 2Q 2008, down from $21.6 million in 2Q 2007.

He candidly admits that some recent initiatives just haven’t panned out. A local ad marketplace introduced this spring, for instance, was poorly timed. “Dealers are not in the mode of asking how they can spend more money.”

But several other projects look promising, including a vertical ad marketplace, which has attracted 10 publishers and 25 partners, with a special focus on the car manufacturers. The cost reductions from the layoffs, which were generally in “non-core” parts of IT and accounting, should also help considerably. The company is near break-even and should be profitable in 2009, he says.

Ultimately, however, the poor economy has taken a heavy toll on car dealers, and their purchase of Autobytel’s leads, which are the company’s primary source of revenues. At first, Autobytel was weathering the slowdown in car sales reasonably well. When the slow down really started happening last December, “we didn’t feel it very much.” But at the beginning of July, dealers began dropping volume, and worse, dropping off. The situation “is not unique to us,” he says.

The slowdown in revenues and the battered stock price ($1.07, giving it a market cap of $45 million) has created “lots of unsolicited interest” from publishers, direct competitors, horizontal marketers and financial investors, says Riesenbach. “It is not as though a transaction has to occur.” He is, however, exploring all the options, hence the engagement of RBC. An ideal situation would be a company that would come in and provide real synergies.

Riesenbach remains bullish on the long-term prospects of the company, noting that the site brings in two million unique visitors a month, and that a new initiative that his team began, MyRide, a personalized car portal, is generating good traffic — 49 percent of Autobytel’s page views. MyRide also has excellent syndication deals with ESPN and others.

But if lessons from verticals such as travel provide any guide, a high concept site like MyRide could take years to fully catch on, so patience is required. After many years of development, meta- search in travel “is just now coming into its own with Kayak,” notes Riesenbach.