The TechCrunch50 show wrapped up today and winners were announced. The grand prize ($50,000) went to Yammer, which is an enterprise version of Twitter that lets companies start internal communication networks. I missed the presentation on Monday but TechCrunch’s Erick Schonfeld has a nice wrap-up, and a video of Yammer’s presentation is here.

In addition to top honors, five additional companies were named as runner-ups. Two on this list were ones I profiled yesterday (Swype and FitBit), and two more are on my list for today. Below is that list. But first, congrats to an impressive field of companies that launched at the event.

GoodGuide is one of those companies that after you hear its proposition, you ask yourself why this doesn’t already exist. The site is essentially an engine for the environmental, social and health performance of products. It pulls in 200 data sources to determine what products are safe, healthy and green (and which ones aren’t). The base data are scientific, derived from many sources explained below, and user-generated content will be added in the future.

The Good: The market for this basically consists of all parents and health-conscious individuals. The founders have a clearly defined monetization plan, which will involve green campaigns from consumer products as well as directional advertising to tie in data about where products can be found. This will include iPhone and other mobile local search apps that will find local outlets that sell products (in the same vein as TheFind).

The Bad: As always, data aggregation is the challenge. The company seems to have a good start with a number of public service agencies and an internal staff of toxicologists. But crunching all this data in a reliable way on an ongoing basis will be a challenge and will make or break the product’s utility.

VideoSurf attempts to tackle the longstanding challenge in online video that content isn’t as easily indexed as text. This is an issue we’ve explored here many times. Many video search players, like Blinkx and Truveo, employ a combination of voice recognition, meta data and adjacent content on the page. Many also rely on the Flickr-esqe “folksonomy” approach of getting users to tag rich media. VideoSurf argues that these aren’t enough, and has developed a search engine that uses face recognition technology and other proprietary IP to tag every frame of a video. This is hoped to get more granular meaning and relevance, including character names and other things that are more likely to be used as search terms.

The Good: Its underlying technology was given the thumbs-up by TC50 judge Bradley Horowitz, who not only spent years at MIT developing image recognition technologies, but also championed Yahoo!’s Flickr acquisition in 2005 and more recently oversaw Google Picassa’s facial recognition. The market could also be ready for this, given the expanding ranks of professional quality video being brought online by the likes of Hulu.

The Bad: VideoSurf enters a crowded space, including companies like Blinkx that have an early-mover advantage and dedicated base of users. It will need good marketing and viral distribution in addition to good technology. Other elements are missing (but could come in the future), such as more social features or ways users can feed back into the relevancy algorithms by voting or indicating quality results.

Atmosphir has built a do-it-yourself game production suite that appears easy for anyone to use. This basically involves building 3-D game scapes, using a series of preset tools. Think of it as Sim City for gaming. Tools in the launch version include bridges, ladders, ramps, moving platforms, catapults, fire breathing statues, and other things that make running and jumping through the game more or less difficult. A central online portal lets producers share with friends and build upon the games of others, in open source fashion. This includes building new themes, rules (think sports games) characters and structures.

The Good: The enthusiasm and market growth in gaming at many age levels could make this a good time for a product that lets users take the actual game production into their own hands. The company has clearly defined revenue goals that include shared licensing for games, product placements (growing area) and premium versions for intermediate developers.

The Bad: Virgin territory makes the opportunity a double-edged sword for Atmosphir. Early-mover advantage comes with unforeseen roadblocks, potentially fatal for companies in the initial stages.

Bojam is basically Apple’s Garage Band meets cloud computing. It lets you record, edit and mix music, but then collaborate with others around the globe. In that way it’s like a 4 track player, where tracks exist thousands of miles apart before being brought together in one place. Completed tracks can then be shared and even sold, using the compulsory license dictated in its terms of agreement (most of the music is streamed so licensing isn’t an issue at the onset). Some of the primary uses will involve bands finding members, and music schools working in collaboration. The company’s range of monetization ambitions include licensing to such institutions as well as the creation of a marketplace for music instruction.

The Good: Other monetization schemes could be more local and directional in nature. The technology already exists to algorithmically identify a song against a music database (see Shazam). If the system can pick up covered songs that are played, it can feed that into a music recommendation engine like Pandora. It can then sell music and concert tickets in a targeted way to a qualified audience.

The Bad: This will mostly be a long-tail play, and most music created won’t be bought and sold beyond artists and their mothers. In order to hit revenue targets, it might have to appeal to a more intermediate or professional level with a premium level product that lets band members record and collaborate remotely. Institutional level products will also require more sales muscle. 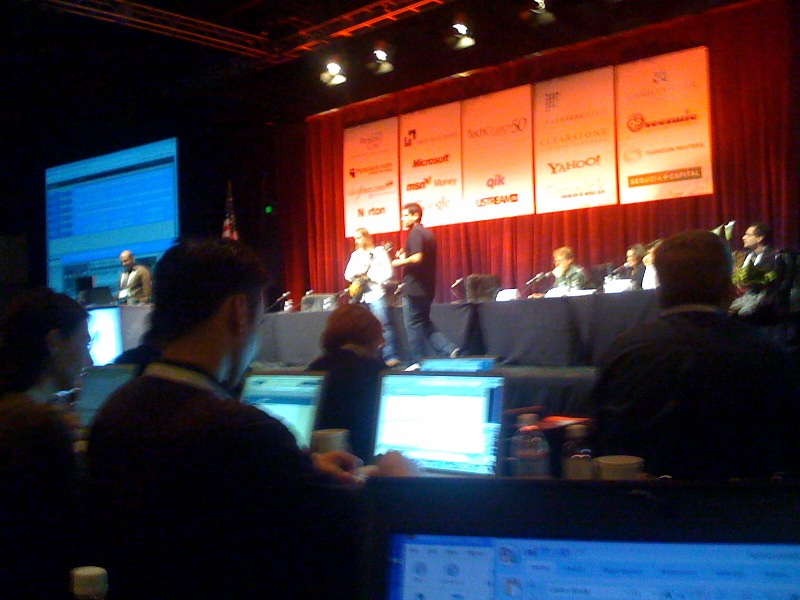 Disclosure: I won an xbox in a random drawing at TC50 today.