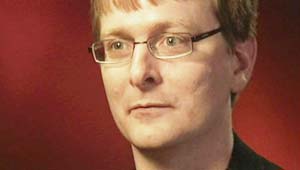 Some industry bloggers like to throw “Google” in the title to get some attention. For me, it is “Hyperlocal.” And somewhere in the middle of any discussion of hyperlocal is Rob Curley.

The Post, for him, was probably a mixed experience. It is now history as he and his “Curley team” of nine people who have followed him from market to market export themselves to sweltering Las Vegas. They’ll be working on the Las Vegas Sun and other Greenspun Media sites in the area. Curley has a budget to hire 40+ people for the Vegas ventures.

I spoke with Curley last night about why he’d leave a place that is considered a pinnacle of journalism to move to Las Vegas, which might be a good place for George Clooney to party on weekends but is no “Brooklyn” full of community publishers, if you know what I mean.

Curley’s spin is that having free rein to develop hyperlocal across a set of Vegas media properties plays to his strengths. In addition to Webifying the Las Vegas Sun, he is set to begin work on Las Vegas Weekly (an alternative newspaper) and also a broadcast property.

He takes pains to note that Vegas isn’t exactly a backwater. It is now a top 50 market. And it not just a rootless place of telemarketers and casino workers, as I crudely suggest. “If you live here, there is community,” he insists.

TV and video, in fact, are a big part of his ambitions now. He says he learned some hard truths from failures in TV in Naples four or five years ago, and is ready to build some great community video now. If Naples had been a success, video would have just trudged along. But instead, something more radical will be developed. And the page views are up there now to be monetized from advertising.

As for The Post, which has spent generously to develop hyperlocal, Curley says it remains well positioned to roll out its next phase of hyperlocal this summer: FairfaxExtra.com. It will be a pivotal effort for The Post, which has traditionally been more oriented toward D.C. and its Maryland suburbs, where the paper’s staffers tend to live, than its Virginia suburbs (when I lived in Virginia, I called it “The Bethesda Post”).

One lesson from Curley’s initial effort, LoudounExtra.com, however, was the need to be more granular. “We geocoded everything in Loudoun from Day 1” but that wasn’t enough. There is a big difference from suburban South Riding and Chantilly to Middleburg in fox country, he notes. FairfaxExtra.com will additionally have 22 or 23 URLs dedicated to specific communities, rather than the single URL for Loudoun County. This will be more akin to the model set by Backfence.

Curley says he doesn’t expect the sites to radically change in the near term, but over time, it is likely that they’ll be better integrated with The Post. The lack of integration has been an ongoing problem, he acknowledges.

On a personal note, Curley says his departure was not a surprise to The Post’s leadership, but that they had asked him to stick it out, which he did. His core staff, which has followed him from market to market, however, began flowing to the Las Vegas Sun in January. There was nothing secret about it, he says. It just wasn’t a cultural fit. He wasn’t appreciated by everyone (and I don’t know enough to take sides here).

Curley also says he believes The Post’s leadership is as committed to hyperlocal as ever. The Post’s leadership at the top — Don Graham and Katherine Weymouth — is “all about giving readers content that they would like to read every day.” He also notes that the community sites will still be managed by Henry Tam, who was working side by side with his team. “He really gets it.”

Note: In my original post from yesterday, I inaccurately noted that LoudounExtra.com hadn’t yet rolled out high school sports (hence, a few notes in the comments). In fact, high school sports have been a core focus of the site from the launch last fall. The section has got the full Curley play of video, photo galleries and blogs.