I recently had the chance to talk with Antoine Toffa, founder and CEO of online video platform VideoBloom. Toffa had previously founded Trip.com which was bought by Galileo in 2000 for $326 million and eventually rolled up into what is now Orbitz.

The VideoBloom platform can be used by Web publishers interested in hosting video content. This includes a few different built-in monetization techniques, such as ad overlays. But unlike other video ad platform providers such as Brightcove, it doesn’t require that you join its ad network. The company rather wishes to be a technology provider, unaligned with an ad network, so its addressable market is broader.

“We don’t place the ads,” says Toffa. “People want video to work, and they want it to work simply. And they want to be able to switch potential providers of those [ad] networks. We’re focused on ways to produce, track, distribute and monetize commercial online video.”

Local fits into this equation in the company’s plans to video enable marketplaces and vertical directories in local areas that are conducive to the medium, including real estate, autos and travel. Yellow Pages publishers are also a key target market according to Toffa, who just attended the YPA conference in Las Vegas to sniff out opportunities in the space.

In this way, VideoBloom joins a growing number of video providers that see the opportunity with IYPs and local search sites. So far TurnHere has had the most success cracking this nut because its documentary-style video has gained IYP confidence in salability to local advertisers. But many other formats will fill out this SMB market, as argued last week.

VideoBloom has also taken a look at the online video opportunity by tracking an index of companies that have integrated online video ads. Toffa pointed me to a chart the company devised showing a sample group of DJIA companies that have integrated video. Ninety-three percent have video somewhere on their Web site, while 13 percent have it on the home page and 7 percent don’t have any video. 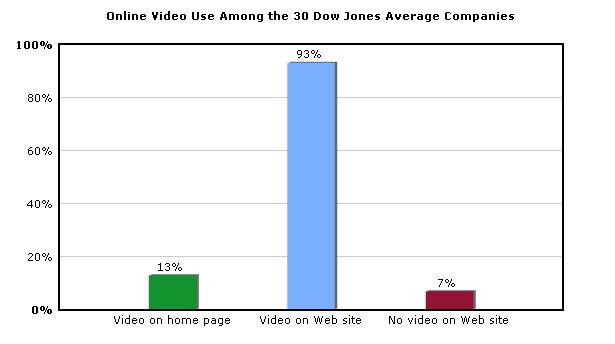 “Like a lot of other technologies, online video has started with large companies, but then there is a lag before it reaches smaller companies,” said Toffa. “Next we’ll do the same index for Nasdaq companies and see what the results show.”

This trickle-down effect indicates the opportunity still to come for SMB video advertising. This is closely related to the democratization of online video pointed out in last week’s conversation with PixelFish. This will continue to happen as a result of broadband penetration, cultural shifts around things such as YouTube, and a developing online video ecosystem.

IYPs are also a big part of this shift, and by extension SMBs are more directly offered something that has traditionally been out of their grasp. Google TV Ads, examined yesterday, also takes a step toward lowering the barriers for SMBs to advertise with video, and we’ll continue to see more.