M:Metrics released a study earlier this week that makes big claims about the iPhone’s impact on the mobile market. It points to the high percentage of iPhone users who are accessing mobile data such as search, browsing and mobile entertainment.

This all makes sense because iPhone users are mostly a self selected segment of mobile power users or early adopters who, not surprisingly, have a propensity toward mobile search and data (not to mention that all iPhones are tied to unlimited data plans).

Similarly, Google announced a few months ago that the majority of Google mobile searches were happening on iPhones. 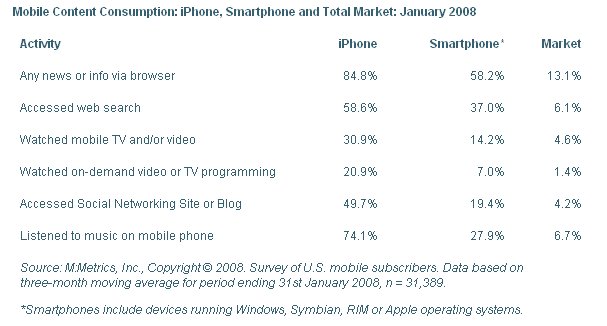 But I’m still split on the quantitative impact the iPhone is having. I have an iPhone, most of my friends have one, EVERYBODY at SES New York this week had one. But is there a “Silicon Valley effect” going on here? What about the rest of the U.S. and those outside the tech world who make up the real bulk of the consumer population?

In fact, iPhone penetration has reached less than 1 percent of the 219 million U.S. mobile subscribers, and it accounted for 2.2 percent of U.S. handset data delivered in February, according to AdMob. M:Metrics numbers above only look at the iPhone’s use with decidedly more fun applications; when you consider all mobile data consumed (e-mail, etc.), the iPhone’s share is put into perspective.

TKG’s recently released Mobile Market View study similarly showed lower than expected interest from mobile users to purchase an iPhone (data below). These data suggest the iPhone isn’t as mainstream as the media would lead us to believe. It’s certainly a mainstream phenomenon in terms of people talking about it, but in terms of actual usage … 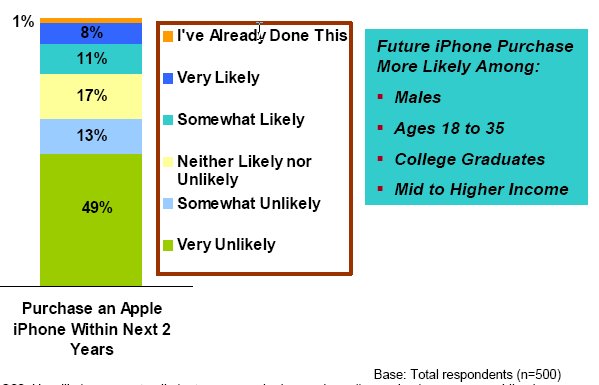 All that said, the iPhone will have a real impact. But rather than near-term penetration, this impact will come in the form of pushing new standards into the mainstream mobile market. This is especially true for mobile search and browser capabilities (a focus of the M:Metrics study), which are the most relevant for local.

In other words, Apple has considerably raised the bar with hardware standards. Combined with the SDK release (and Google Android), this will improve mobile products and finally push mobile search and browsing beyond the early adopter phase where it’s been stuck for years due to a low-quality experience (mostly WAP).

As this happens, prices will drop for the iPhone and copycat devices that inevitably flood the market. With greater mobile search penetration comes implications for search volume, search inventory, advertiser interest and better ad serving products. This will likely come in the form of a mobile extension to online or search based ad campaigns such as AdWords.

Panelists on TKG’s mobile panel at SES this week agreed it will take at least a few years before all these things come together to form this ad serving capability for businesses of all sizes to get in front of mobile users. But the wheels are finally in motion (thanks Steve). One thing that is clear now is that since mobile and local are inherently related, local search apps will benefit from all this development.

For local, important questions to start asking in the meantime are: What role will IYPs play in reselling mobile search marketing? Will they do the same as they are doing with online search and video? And given the chance, how quickly will they jump on this opportunity?