Peter Krasilovsky’s post this morning got me thinking about MySpace’s future. It makes a lot of sense that the company would come out with an ad product to rival Facebook’s Pages and Ads programs. It has already made a few moves in this direction.

Overall, the once dominant social network is scrambling, given new competition from Facebook. I’ve noticed through the diminishing frequency of visits to my MySpace profile, that the interface has begun to improve — perhaps starting right around the time MySpace realized the new competitive threat. Previously, MySpace was so dominant, almost monopolistic, that it got away with a famously subpar interface.

Today when I logged on to my MySpace profile to seek further evidence of this, I saw a new feature (maybe not brand new — again my visits have declined given limited time and the gravitational pull of Facebook). This can be seen as MySpace’s answer to Facebook’s News Feed. More accurately, it’s a direct clone — almost as transparent as Verizon’s new iPhone clone. 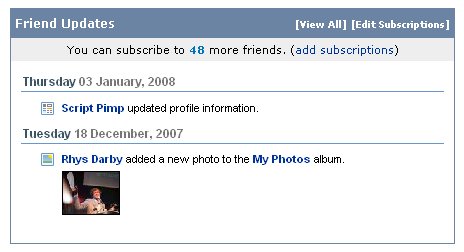 To be fair, MySpace still has a leading market share according to comScore, albeit much slower growth than Facebook (see chart below). But it needs to get creative to curb the herd mentality at the heart of social networking that is sending lots of users to Facebook.

True, you can have accounts in both places, but I maintain that there is a finite amount of time each user has for social networking. Session lengths — a key metric in social networking — will be affected by this zero-sum game.

Among the many things MySpace has to develop in the face of a rapidly growing competitive threat, the SMB effort will be interesting to watch. We’ll keep our ears to the ground.