New local search destination Grayboxx launched today in its first locality of Burlington, VT. As mentioned in Grayboxx: A Sneak Peek, the site will have a staggered launch starting in small towns and cities where it believes it has a competitive edge over other local search destinations that focus more on larger metros (see rollout schedule here).

The source of this competitive edge is its ranking algorithm for businesses that is built on “implicit reviews.” This pulls together consumer activity to glean votes of confidence in businesses, and accordingly ranks businesses in quantitative measures. The key is that this “preference scoring” formulates rankings for businesses in categories and locales that don’t garner enough explicit reviews (traditional narrative reviews generated on sites like Yelp), such as plumbers in small towns.

“It’s an algorithmic and scalable way to rank businesses, not just restaurants and night life but every category. And the nice thing about that is that we have results just as well in Moscow, ID, and Bridgeport, CT, as we do in Chicago,” CEO Bob Chandra told me. He added: “Places like Yelp are social networks for foodies. I’d love to see a social network for people interested in plumbers.” 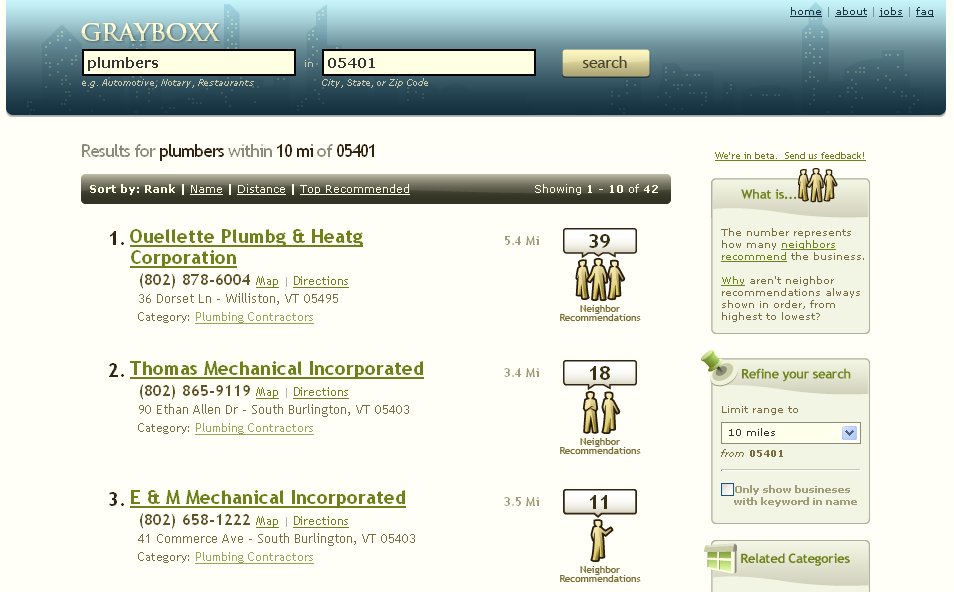 This is a nice point of differentiation for Grayboxx — something that is definitely required in the hyper-competitive local search world. It will utilize this to attract viewers, but as mentioned in the previous post, it could also provide the technology and/or the ratings content to other local search sources such as IYPs.

This is the classic destination vs. platform distinction. It could attempt to be both, but for now is primarily a destination. The destination experience itself is different and, to me, useful. However, it requires that you type in a ZIP code for Burlington, VT, but doesn’t allow you to type in the city name. This requires a separate search to find out Burlington’s ZIP code if you don’t know it (I’ll save you the trip, use 05401). I imagine this will change though.

Check it out for yourself and let us know what you think.