Amid the many redesigns we’re seeing in local online media, Yahoo! Local today announced a series of functional and aesthetic enhancements. They are mostly meant to accentuate and motivate more user-generated content and social search tools but also include a number of other evolutionary improvements.

One is a modification of its relevance engine to include review content in its index and accordingly serve better local search results. This will also serve as a foundation for lots of new directions in which Yahoo! would like to take the product, according to Brian Gil, lead project manager of Yahoo! Local and a five-year veteran of the division.

“We’ve always considered ourselves to be a social utility with a core focus on relevance and accuracy and depth of content,” he says. “We’re shifting the site design to spur more active engagement from the community, and we also modified our relevance engine to bring the best and closest results to users’ [queries].”

Specifically, new features will allow users more access to comment on reviews to express whether they were useful and similarly add their own opinions. Yahoo! hopes this will expand the feedback loop and level of interaction among users.

This review content will also surface on users’ “MyLocal” profile pages. For these pages, users will also be encouraged to add pictures and avatars to personalize profiles and reviews. This is reminiscent of Yelp, which has done a nice job inspiring contribution with such personalization tools that play off users’ egos. Yelp has also targeted these efforts toward the demographics most likely to engage in UGC, which Yahoo! could similarly take a page from.

“Avatars are a good mid step, but getting photos of the actual people is really beneficial to the experience,” says Gil. “So we give the avatar as an option, as well as no image as a placeholder, but we’re also making it much easier in this release for people to provide a photo of themselves, which gives a lot more context and personal flavor.”

A ‘save for later’ feature will also join the MyLocal profile feature and likely be the basis of new social features to share reviews and favorite listings with other users (see TKG Advisory Save & Share: A Sound Investment For Local Search). This is also in line with some of Yahoo!’s other efforts with social networking and social bookmarking.

“This is the first step towards publishing a collection of things to share with others such as ‘my favorite Thai restaurants,’ ” says Gil. “Save for later is for personal use, but from there, if I write reviews and collect them into a group, the next step is to share with friends or the community in general.”

Putting on a New Face

The new site will also roll out a city guide tab that will serve as a new jumping off point to the local search experience. Part of this new page, interestingly, will feature and delineate a few content verticals, which it would like to accentuate for both local searches and also ratings and reviews generation. These include Restaurants, Health & Beauty, and Home & Garden.

“This reflects that we are not just a dining guide or just focused specifically on arts and entertainment,” says Gil. “Of course it’s a popular category and we strive to have the best content. But the types of demographics that we cater to and the types of experiences we’re trying to provide go far beyond that. The focus will shift more towards home-owner demographics with a variety of different local purchasing needs.” 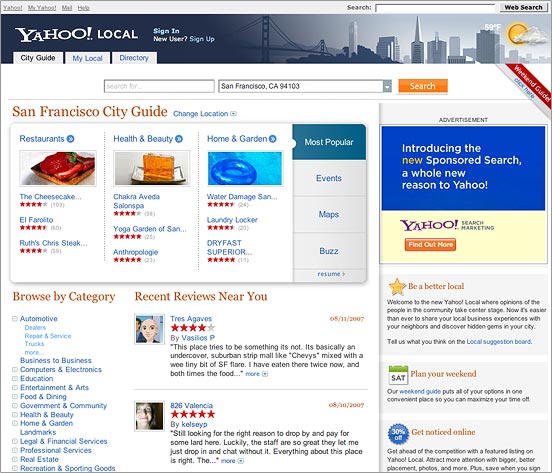 These city guide pages will also have custom cityscape artwork, weather overlays and featured items. This is similar to the city-specific pages featured in Citysearch’s recent redesign (the pages also look similar) and is a big improvement in interface and design over the previous version of the site.

Yahoo! will roll this out for 20 cities at the onset, with more coming over time. For most of the 18,000 communities Yahoo! Local serves, which are more rural, it would like to maintain a feeling of local relevance and flavor (rather than being branded as the nearest big city) and will likewise serve non-city-specific banner art, according to Gil.

The redesign will also include a new “weekender” page with lots of arts and entertainment type content to give users a place to find activities and places to go during the weekend. This will be served with geographically relevant content but will not be personalized to registered users’ ongoing preferences and behavior, although that could be coming in a future version of the product, according to Gil.

These all join a few other bells and whistles that collectively boost the appeal of the site such as a buzz cloud (shown above) to exhibit the most popular local searches in a given community. Overall these changes are nothing revolutionary but constitute a nice evolutionary step for Yahoo! Local, which has a longstanding position in local search and is currently the traffic leader (according to comScore) among local online directory sites.