New legal search destination Avvo launched today to join the likes of FindLaw and LexisNexis Martindale-Hubbell. Like these destinations, it offers users search tools to find lawyers in different categories and locales. Legal search will be a growing area as the local search world continues verticalize in various ways. LexisNexis Martindale-Hubbell’s partnership with Spot Runner to embrace video advertising more meaningfully is one of the developments that will push this forward. Likewise, Avvo launches with lots of new tools to search for and rate lawyers, including a proprietary ranking system for individual lawyers.

Avvo’s proprietary ranking system should prove to be one of the company’s biggest differentiating features to users who are interested in finding lawyers locally. To formulate this 1-10 ranking it has created an equation that brings in ratings from users, other lawyers and publicly available databases such as state bar associations.

The latter gives it some similarities to publicly derived automatic value estimates pulled together in another growing online vertical: Zillow. Zillow Chief Executive Rich Barton in fact sits on Avvo’s board, and the two companies share sources of funding from Benchmark Capital and Ignition Partners, which together invested $10 million in Avvo in April.

The system ranks thousands of lawyers in about 110 practice areas based on experience, education, or any slaps on the wrist they may have received while practicing, according to CEO (and former attorney at Preston Gates & Ellis) Mark Britton. It meanwhile plans to brings in contextual ad revenues, and other ad formats could open up in the future.

The company also allows lawyers to go in and add information about themselves to bolster their listing and also feed into the rating they get. Again, this is similar to Zillow in that home owners can volunteer information that assists in home valuations (zestimates) such as recent renovations or value enhancements that wouldn’t be reflected in public records.

This user-generated content will also boost the SEO value of these individual lawyer profiles by deepening the content. Done on a large scale, this can have traffic generating abilities and natural marketing benefits for Avvo. This is similar to the strategy recently set in motion by Google in its Local Business Center to enhance its local search results by allowing businesses to populate and update the profiles for their own Google Local listings.

Lawyers will be able to do this on Avvo by registering with a credit card, vouching for their own identity (as is done with home owners on Zillow) and then populating their profiles with anything they think will lend credence, trustworthiness or marketing benefit to their profiles. The level of competition and margins in the legal profession (examined last week) could increase the chances of this participation and content generation, Britton hopes.

“With lawyers, you have a highly competitive marketplace with 827,000 private practices with half of them being solo practitioners that are just trying to keep the doors open and get clients in the door,” he says.

Fox’s profile page on Avvo includes only a tidbit of information about his 33 years of legal experience. Still, Fox – who does not have a Web site but advertises in the yellow pages – said he would possibly take a closer look at adding to the profile as a possible marketing tool.

This is an interesting comment, given that the Yellow Pages industry has traditionally owned the legal vertical with respect to local advertising. However, data from The Kelsey Group’s most recent User View Survey (Wave IV) show growth in online lookups for professional services, suggesting opportunity for brand creation in online legal search.

Sources Used For Professional Services, among those using new providers 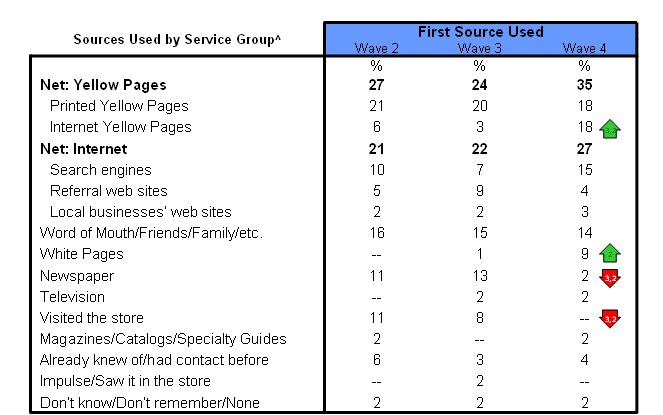 Another factor at play here is the verticalization of local search. Worth noting are some of the recent developments in the legal search vertical, which we expect to continue as companies see the benefits of vertical search. Things are generally trending toward this verticalization due to search relevance, quality traffic, clearer user intent and lots of other factors we’ve explored in the past.

Kelsey Group forecast data also show expected growth in the global interactive directory market (local search and IYP) to be 22.3 percent (CAGR) from US$4.1 billion to US$11.1 billion. The U.S. figure is meanwhile expected to grow 26.1 percent (CAGR) to US$4.9 billion.

The high growth rate expected for online revenues will be partly due to increased investment levels in SEO, driven by increasing SEM prices and resulting margin compression (Citysearch’s recent acquisition of Insider Pages, Google’s aforementioned Local Business Center enhancements, and SEO efforts around the local search world to deepen content are all examples of this).

But more relevant to this discussion is that increased advertiser demand in online verticals will contribute to this growth. Professional services and the legal vertical will see some of this.

Lastly, the Seattle PI article mentioned above goes into some of the issues and concerns some attorneys have with Avvo’s rating system (“This whole thing is a joke,” said one lawyer with a 3.7 rating). Some of this is most likely sour grapes for lawyers with low ratings, but there could also be some legitimate concerns here that are worth noting, and possibly worth Avvo’s consideration for future generations of the product.