After completing a free DA call this week using Google’s newly launched 800-GOOG411, we were asked if a text message was desired in addition to the free voice and “connect me” features (the multimodal functionality that is standard in a growing number of free DA offerings). But what we also received, interestingly, was a link to a Google map of the location we were looking for. The map provided was part of the WAP-based mobile mapping product that Google has had for a while, but it’s an interesting push of an existing product, and one that brings yet another modality to the rising standards in the FreeDA space.

As we’ve said in the past, Google’s and Microsoft’s entrance to the Free DA space will push overall adoption forward (benefiting smaller players in the meantime). The exposure that G & M have shed on the space should push the idea further into the mainstream that there are free and easy alternatives to paying a few bucks for a carrier delivered 411 call.

Through this, Google sees an opportunity to raise adoption and awareness of its mobile products, including in this case, mapping. This is part of an overall push that includes search email and calendars.

This will raise the already fast-moving bar in the free DA space to integrate more features such as mapping. Indeed Free DA could prove to be a powerful venue for Google to push all of these services that have erstwhile lingered in early adoption stages. As usage rises, advertising won’t be far behind. This could take the form of text messages being sent with DA search results for complimentary and same-category products(similar to the UK partnership of MIVA and 118 118). 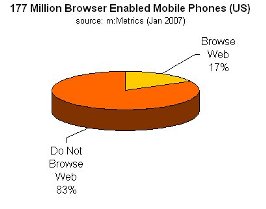 Look for Tellme/Microsoft to be equally, if not more, innovative with product integrations and monetization. The effect this will have on the product road maps of incumbents of the free DA world – such as Jingle – will also be interesting. Either way, text and voice will continue to be the most prevalent forms of mobile local search in the near term, given low smart phone penetration and the low WAP capability of mobile phones in the U.S. (see chart to the right).

More feature rollouts tied to free DA (and mobile local search in general) is also a natural and expected progression. Although, keep in mind providers will continue to be careful not to stray too far ahead of consumer comfort levels in what is largely an early adopter mobile search medium (again, see WAP penetration levels above).

There are also obvious hardware constraints (i.e. small keypad, screen) that make feature deployment difficult. Add to this, the perennial carrier control issue that pushes 99 percent of mobile search applications off the carrier deck, to rely instead on being found on WAP browsers — a sizable marketing challenge, even for Google 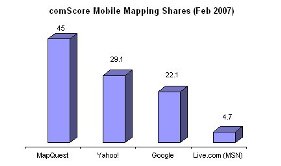 Challenges aside, data presented by Nokia’s Ralph Kunz at TKG’s Drilling Down on Local conference indicate that users are interested in mapping and directions, chief among mobile features. Google’s mapping push through its newly launched DA product indicates it knows this well.

Of course what consumers say they want and what they actually want are two different stories, as astutely pointed out by James Surowiecki in his Financial Page in this week’s New Yorker. This is central to the “feature creep” challenge that plagues all tech product manufacturers and is especially emblematic of mobile search application development.

But we’re slowly getting there, and expect a great deal more experimentation at all levels of the mobile market.